Subterranean and Formosan Subterranean Termite Swarms. Like a real-life horror movie, termite swarms rise from out the dark to create new colonies as soon as the weather warms. You may spot these flying wood-eaters in a blurry dark cloud silhouetted in front of a porchlight. They are drawn to the illumination. Swarms can occur inside or outside the home. That’s right, you can be relaxing in your living room or bedroom, and a swarm will appear right in front of you. If they emerge from an inside wall, you’ve got a problem.  But inside or out, save a couple of specimins in a plastic bag so a termite professional can identify the species. In Arizona, it will be either Subterranean termites or the Formosan Subterranean termite.  Also if you find discarded wings on the ground, the enemy has already landed.

The flying termites are called alates (or swarmers). They are not particularly strong flyers, and air currents help to carry them to a destination. The swarmers are made up of males and females who are mature, are not ready to dine on wood yet but are there for a purpose. To mate and reproduce. Soon these creatures of the night couple up and begin a journey as the next generations of Queens and Kings.

Termite infestation falls into the out-of-sight, out-of-mind category of everyday life. However, that does not stop them at all. By the time the trails and other evidence appear there is significant damage in the home. 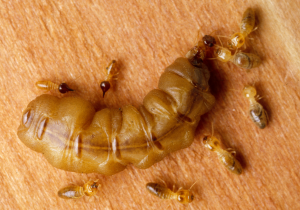 Mature queen termite surrounded by both workers and soldiers

Subterranean termites are destructive because of the vast size of a colony (up to several million) and the consumption of food required to for them to thrive. Experts state that a mature Formosan colony can consume as much as 13 ounces of wood a day and can destroy a building in as little as three months. It doesn’t matter if a house is surrounded by a block wall or your property does not have any trees. Subterranean termites will tunnel their way underground. Imagine a football field. That is the size of a termite infestation underground. Detection close to your home raises the probability they are coming to for dinner.

The Formosan termite is known as the most economically damaging pest species to date. A colony of the Formosan subterranean termite may contain several million individuals that forage up to 300 ft. in the soil. A termite queen will produce one egg every three seconds, averaging 30,000 eggs daily. That’s 10,950,000 eggs per year. The king is always close by. The queen’s abdomen increases in length and expands gruesomely after mating. It grows up to the size of your index finger. The mass is pulsating and pushing out eggs.  She can no longer move about freely, so attendant workers provide assistance.

This goes on until the next colony matures and thousands of swarmers leave in search of a new residence. In Arizona, there are an estimated fourteen to sixteen colonies per acre of land. That’s millions of termites underground. Think about it. We could be standing or walking on termite colonies, they could be anywhere!

By The original uploader was Ellmist at English Wikipedia Later versions were uploaded by Minesweeper at en.wikipedia. [Public domain], via Wikimedia Commons, https://upload.wikimedia.org/wikipedia/commons/e/e8/Formosan_termite_alates.jpg